Today is my last day volunteering at the orphanage. It’s still pretty early here so most of the kids are doing their morning chores but it is such a beautiful day that I decided to sit outside to write in my journal. On the car ride here I tried to take everything in. The car ride that I had taken 20+ times back and forth and thought I had memorized. All of the cultural differences that I was so unfamiliar with when I first got here are now all things that I got so used to seeing.

Mauricio just came out of his house and saw me from across the orphanage. He yelled my name – he calls me Jessieca even though all of the other kids call me Jess – and ran and jumped into my arms. I told him it was my last day here and he just kept shaking his head “no”. It is so touching to see that I have made that kind of impact on him while I’ve been here. He just ran back to his house so let me continue… As I was saying, I was noticing all of the things that we don’t have back home, the things I will miss. The crazy driving that I was first terrified of, the colors, the sounds, the beautiful people, the dogs, horses and cows walking down the street next to the cars, and of course what I will miss most of all, the sunshine.

So to continue what I was saying about Mauricio… He ran back to his house to get his breakfast and came back out to play with me and the other kids. We played with the Bananagrams and Mauricio spelt out “Jessica y Mauricio” and made me take a picture. They also taught me a game using the dominos and we made string bracelets. The bracelet I made today was red, white and blue; the colors of both the American and Costa Rica flag. I love having all of these bracelets on my wrist because they all have a story behind them. Although the downfall will be when I take them all off and I have a super cute tan line halfway up my arm.

I went to a few of the houses of the kids I became close with to say goodbye. In Spanish class we learned some goodbye phrases so I used those to wish them the best and to tell them I will miss them and they will always be in my heart. The younger kids were clinging onto me and kept saying “no, no, no”. Saying goodbye to Mauricio was one of the most difficult things I’ve ever had to do. He was clinging to me and hugging me so tight. And of course as he started getting teary, I burst into tears. Once I stopped crying and before I got picked up I was waiting down by the front gate and heard the voice that I knew so well, yelling my name. When I turned back I saw Mauricio standing in front of his house waving goodbye and saying “Adios Jessieca!” So as you can image I was a mess all over again. Words can’t explain how much this child means to me and only God knows if one day we will meet again. Mauricio will forever hold a place in my heart.

This afternoon Ansley and I walked into Cartago for the last time. I really wish I has more time to get to know her because she was so fun to hangout with. I Skyped with my mom and sister tonight to go over my packing list and flight information. I know I shouldn’t be but I’m a little nervous about flying tomorrow. I wish I could just skip the full day of travel and just be home. Saying goodbye to my friends is going to be really hard too. I have a long day ahead of me tomorrow so I should get some sleep…Goodnight! 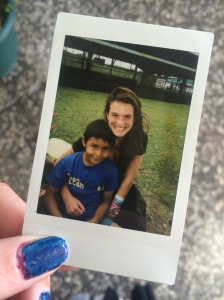 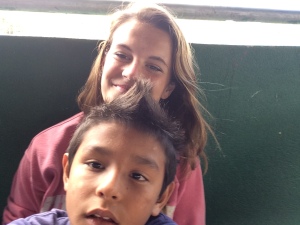