Today we went to a different orphanage called Pueblito. The second we got there I could already tell it was going to be a completely different atmosphere. Rather than having one house of 20 kids like Pani, this was set up sort of like summer camp. There are 16 houses with around 6 or 7 kids living in each house. We played outside for the majority of the morning, running around and playing soccer with the older kids. I immediately connected with this 15 year old girl named Maria. It shocked me to hear that because Maria’s maturity level was more like a ten year old. Even with the donyas (the caretakers) giving them some structure, she grew up without being taught manners or right from wrong. We both loved to run so we raced each other and some of the older boys. She kept yelling “rapido” meaning “faster” and laughing the whole time.

After lunch we went to a volcano called Irazu where some scenes from Jurassic Park were filmed! There was an incredible view of the volcanos peak with these huge white clouds behind them. It was pretty windy because we were so high above sea level but the view was totally worth it. Once we got back home, Nicole, Helen, Victoria and I went out to walk around the city. We walked to the park in front of this church in San Rafael and sat on the benches and just talked about life. It’s so cool that I have already built such awesome friendships after only 3 days. It’s also cool to see how well I already know the city, although we did get a little lost coming back. I have Spanish class tonight and tomorrow we are learning how to make guacamole. Ciao! 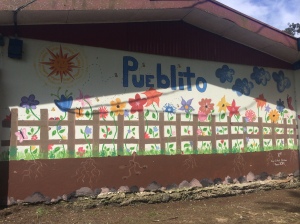